Copyright © 2001-2019. All rights reserved. Permission is needed to reproduce any of the content of this web site.

The Past Life Therapists Association

The Past Life Therapists Association 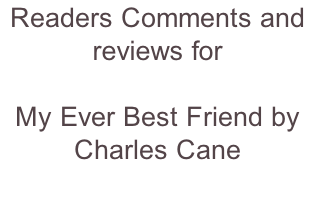 A gripping story written in a style that immediately made me feel I was part of the stage set described.

It was almost impossible to put it down once my reading had begun. Once I decided to spend just five minutes with the book ..........only to find, 40 minutes later, that I just could not stop reading it.

The authors style made me feel as if I was walking, laughing, talking and, towards the end, weeping with the key characters.

I am interested in reincarnation and this book was a great help to me. However, even if I had been an avid opponent of previous lives I would still have read My Ever Best Friend, mainly because it is a damned good read!

In this book there are two narrators which became immediately obvious, and easily followed, when their words were shown in italic or roman fonts respectively. This method of presentation worked well.

Thank you for sight of your book "My Ever Best Friend" which I finished yesterday. This was, of course, my first reading and it will not be my last ! It is a very substantial piece of work which merits more than the slightly superficial rush through which a reader is almost bound to give it because of his or her eagerness to follow the story line through to know its end. But there are several distinct levels to this book.

Firstly, though I refuse to rate them in any order of importance at this stage, there is how it stands as something to hold (and reward!) the reader's attention. Well, Charles, there is no doubt that you can write, and that you can make it difficult for anyone to put your book down. I know that the people in this book were - indeed, are - vividly alive in your memory, but you manage to make them live for us too.

Secondly, I appreciate the problems you must have had in deciding how best to present your complicated material so that your readers did not become confused. The solutions work. For example, the use of a conventional font for sections related to Charles Ganton's life, times and words, and the italics for your accounts and interpolations, make the shift from one to the other very clear and smooth. So the "story", as a story, can be followed with considerable success. I must admit, though, that until I fully realised that you were "reporting" the words and attitudes of 18th and early 19th century people as closely as possible (without, however, jarring too distractingly upon those of the present day reader) I did find some of the language slightly stilted at times. And the frequency of so many people weeping or falling into one another's arms also seemed a little exaggerated. But then I recalled similar sentence constructions and actions in novels of those times, and I fairly quickly accepted that this was the behaviour you observed and it would have been false to "modernise" your material to suit our current ways of talking and acting towards one another.

Thirdly, you managed to deal with the intensely personal and emotional aspect of this book with great sensitivity and dignity. I am still trying to come to terms with your experience and cannot yet grasp, fully, its implications. I feel deep sympathy for what you - and, to a large extent, Sandra - have been living through for a long time but, at this stage, my reactions are confused. They probably will continue to be so, at least until I've read it again in a few months' time.

Meanwhile, I want you to know that you've every right to be proud of such a well written, fascinating piece of work and - forgive me if it seems a somewhat trivial comment on a truly serious book - I feel it would make a splendid film or TV serial ! Congratulations !